What is it about old recipes that capture our interest and imagination? 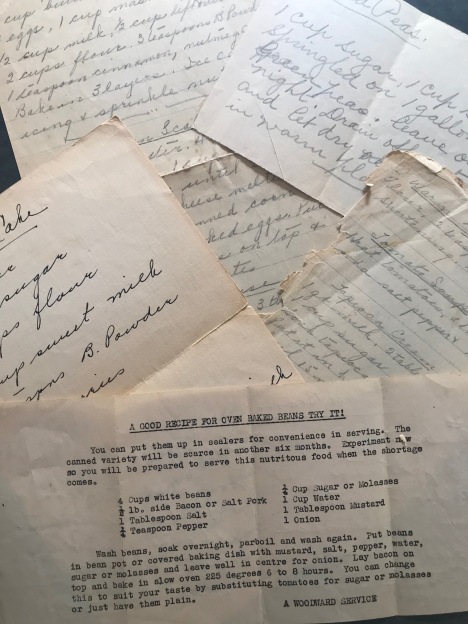 For some, they recall a space in time – like a song you haven’t heard forever but that instantly transports you back to sometime special and meaningful.

For others they’re like a warm blanket – familiar and comforting.

For me they’re also an integral part of my family history. After my Mom passed away this year I found a large manila envelope with my name on it. Inside were hundreds of recipes – some loose, some in old notebooks, some in plastic covers. They date from the early 1900s through the late 1990s. They passed from my grandma to Mom and I feel extraordinarily fortunate to be the new keeper of these treasured recipes that have been collected, transcribed, and clipped for so many years. They’re not only a trove of interesting and often odd ideas for dishes and menus, but a record of sorts of my family’s history. Many are scribbled on old letters or envelopes (many with partial letters, or addresses on the reverse), the backsides of shopping lists, or napkins from restaurants. The recipes that are clipped from newspapers and magazines are an amazing snapshot of their time. The flipside of the recipe is often a portion of a store advertisement or event notice, even the odd obituary! All of them spark a memory and tell a story. 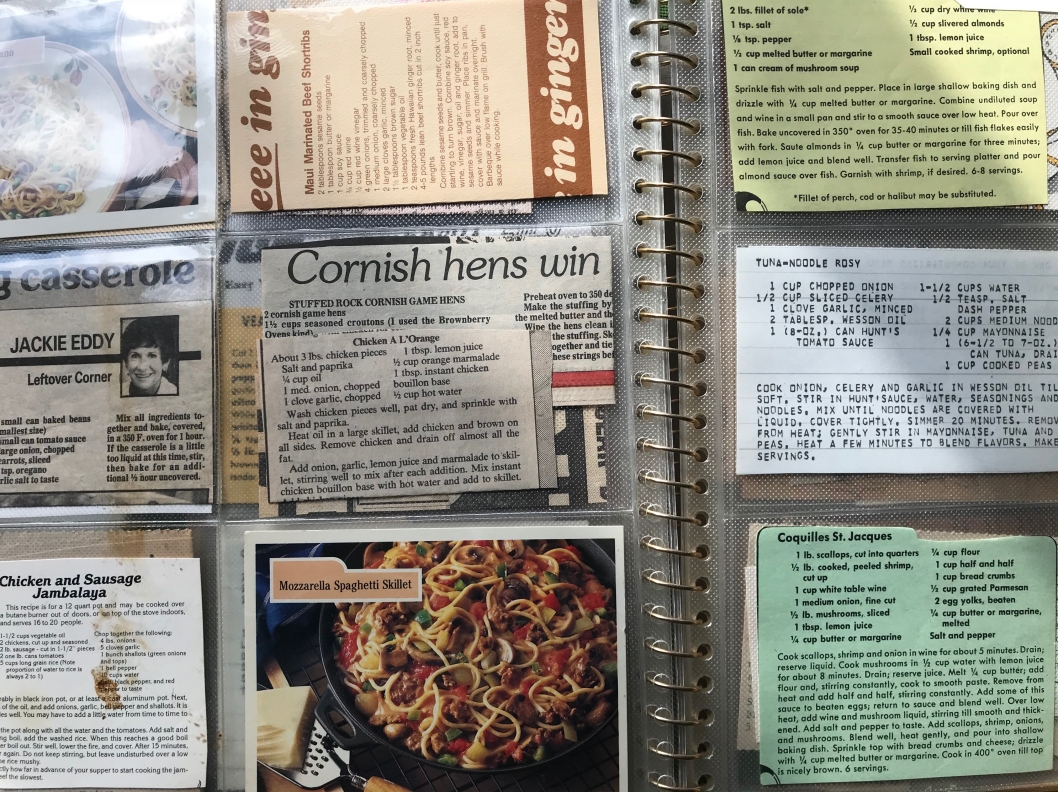 I used to assume that my love of cooking and food came from my Mom and Grandma – so many of my memories of them revolve around the kitchen.  Recently I’ve realized that may not be entirely accurate.  Both were good cooks – they had healthy and hearty meals on the table for their families every day – but unlike me, I think they enjoyed the “idea” of cooking rather than the actual process.  It was the recipes that fuelled their imaginations.

What intrigues me is so many of the recipes would never have been attempted by either Mom or Grandma. “Scaloppine Alla Parmigiana“, “Salmon Continental“, or “Carrot Timbales” never showed up on the table, but the recipes are lovingly filed away “just in case”.

This space in the “blogsphere” is dedicated to preserving not only these recipes but the memories that surround them. I’ll try to decode them somewhat along the way – What was the recipe’s origin? What was happening in the world when they were written? Are they still applicable today? What is a “timbale” anyway?

I look forward to sharing these treasures and maybe starting some conversations along the way.

2 thoughts on “The Ingredients….”

A note about the recipes

The recipes presented are in their original format and may or may not produce successful results! While many are tried and true family favourites, others are simply offered for nostalgia and entertainment.